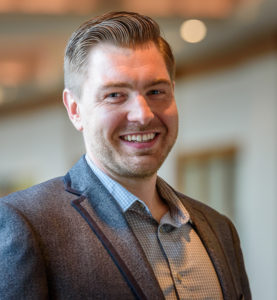 Mark is Co-Founder & Director of R&D at Teldio, a two-way radio applications company. He studied computer engineering technology at the Rochester Institute of Technology, and was later recruited by Terry Matthews and Wesley Clover to come to Kanata. Mark’s desire to continually learn and share knowledge has led him into being part of the founding team for TEDxKanata and was a speaker at last year’s event.

It was his love of technology and the environment that collided after he participated in the inaugural AquaHacking Challenge, where his team tied for 1st place and the birth of Water Rangers begun. As Co-Founder of Water Rangers – a not for profit organization which aims to connect citizens to their local rivers lakes and streams – Mark is currently the Director of Technology. In his spare time, he enjoys playing darts and spending time with his wife and two dogs.

From federal government employee to beekeeper? Meet the Bee Gal!
Scroll to top